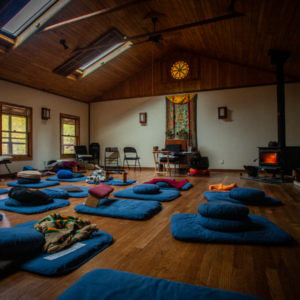 This is part one of three of an interview Southern Dharma Executive Director Sonia Marcus conducted with long time friend of Southern Dharma, Linsi Deyo. Linsi is the owner of Carolina Morning, a company that specializes in meditation implements, cushions, seats, furniture and other supports. You can learn more about their work at www.zafu.net

SM: Let's start out, if you don't mind, by introducing ourselves. What I know about you so far is that Carolina Morning is your business and that you used to serve on the board at Southern Dharma. I was wondering if you could tell me a little bit more about yourself and your backgrounds.

LD: When I went to college, I was a philosophy major. And in the end, I was a philosophy major. I did a lot of switching, and I wanted to go to graduate school for Comparative Eastern and Western Philosophy. I got accepted at a school that I didn't want to go to, and I did not get accepted to the school I wanted to go to, so I decided not to go to the school I wasn't drawn to and ended up not really using my college education in the way I expected.

I was sort of trying to find myself. The closest I got to a career was my interest in therapy. I worked in mental hospitals, and I was on track to become a therapist. And inside of myself, I felt like I wasn't really ready to; I felt like I needed to heal more.

I had moved to Spring Creek—to Madison County—very close to Southern Dharma and had met Elizabeth and Melinda. I was very interested in Southern Dharma because I already considered myself a Buddhist and had done a number of retreats in the Northeast.

SM: How did you end up in Spring Creek?

LD: I hiked the Appalachian Trail.

SM: You just walked off the trail and into Spring Creek?

LD: Sort of. I hiked the whole trail. I started in Georgia and hiked all the way up to Maine with my boyfriend at that time and our dog, Otis.

SM: So it was the three of you on the AT.

LD: Yes. Otis couldn’t hike through the Smokies with us, so we boarded Otis. In the process of boarding the dog, we went through Spring Creek, and we met Pearl Goforth. Pearl lived very close to Southern Dharma, and for some reason, we stopped at Pearl's house. I think there was a dog in the road or something like that.

We pulled over. Pearl was an 80-year-old woman and we started talking to her—she was very friendly—and she said, “Dolly and Grace have that little house for sale up on the hill over there.” We looked up the hill, and she said, “If you think you like this area so much, why don't you just go ahead and buy that house?”

LD: I was very involved with the Tibetan Buddhist community [in Boston, where I came from]. There were very few Buddhists in Spring Creek at the time. Then, I found out about Elizabeth and Melinda and what they were doing. I'd only come to Buddhism in 1980, so I was in that ecstatic stage of having found this miraculous new way of life.

SM: What did that ecstatic stage look like? How did that manifest?

I was in my early and mid-thirties, so it's a time of life. I think we all do this in our own way. Really my lesson from Southern Dharma, by working so closely with Southern Dharma and getting to know the teachers, was realizing that the teachers were on the same path as me, and a lot of them had similar struggles to my struggles. That did draw me, and wanting to be part of bringing the Dharma to birth in that place was very exciting to me. The Dharma had, in combination with therapy, been a very powerful movement in my life and they still are. They still are.

SM: So it's not just that we have your cushions and zabutons here because you're a local company and you've been involved with Southern Dharma but because the whole company idea itself was born out of Southern Dharma and your experience with it.

Keep an eye out for Part 2 coming soon!