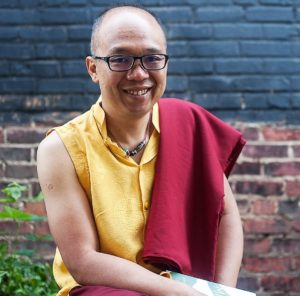 Dorjé Lopön Dr. Lye grew up in a Buddhist home in Malaysia. From a young age, he studied and practiced Buddhism with teachers of various traditions. He met his first Tibetan teacher in the United States when he was an undergraduate student. After earning a doctorate degree in Buddhist Studies at University of Virginia and teaching for ten years in American academic institutions, Dr. Lye left academia to devote his energy fully to Dharma work. In 2013, he was appointed as a Dorjé Lopön (lit. “vajra-master”) of the Drikung Kagyü Lineage by His Holiness Drikung Kyabgön Chetsang Rinpoché (Head of the Lineage) and was formally enthroned in his home city, Penang, Malaysia. When not teaching, leading retreats, or serving the Lineage in Asia and North and South America, Dr. Lye teaches in Asheville, where he is founder and spiritual director at Urban Dharma North Carolina.